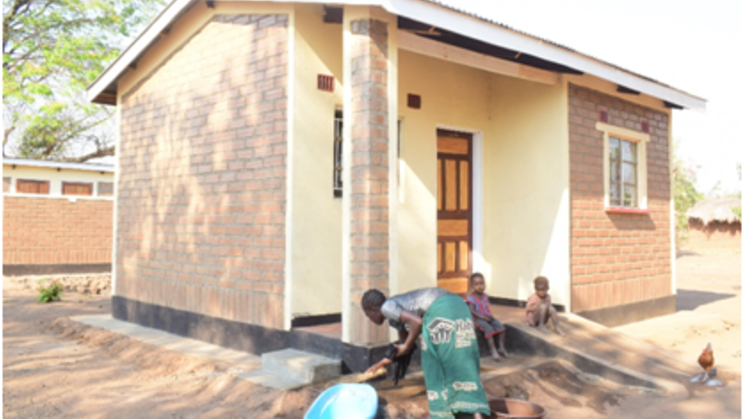 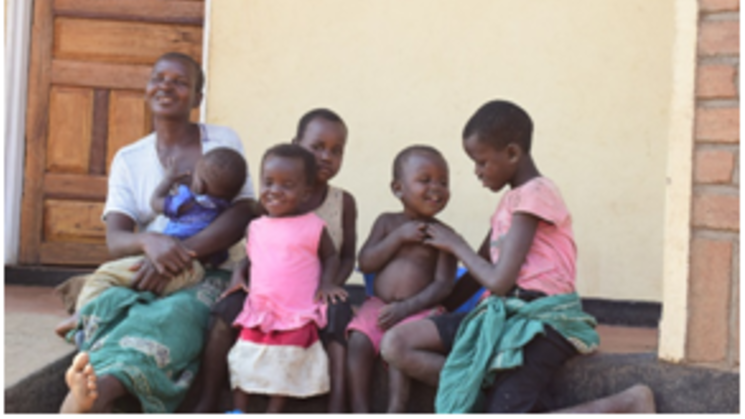 Joyce vertelt: "My life is not the same as it was in the past. It has really improved in several areas for the better, for example in my old house, my children used to suffer from coughing diseases due to dust but now they are no longer experiencing such problems. Another example is that the money I was using to maintain my old house are now  being used to take a good care of my kids in terms of food and clothing and they are growing with good health. As it is when rain comes I just hear the sound of it but cannot penetrate through my roof and the sound of rains when hitting on the roof of my house becomes a song that I can even dance."

A 28-year woman, Joyce ,was previously hardly taking care of her four kids in a very pathetic conditioned house which was leaking heavily during rainy season.  She had no dream that one day her housing problems will be buried by a certain humanitarian non-governmental organization called Habitat for Humanity Malawi through global volunteers. “During rainy season, sleeping was a total miserly in the sense that I and my kids had to find a small space within the house that we deem that there is no leakage just to keep ourselves standing waiting for the rain to come to an end”, Joyce explained about the old condition of her house.

Chisomo, Usen, Fanny, Mphatso and their mother Joyce are now very happy seeing themselves sleeping in a house that is not only beautiful buts also durable and leaks no more. They are being called bosses in the village not because they have got money but they are staying in a good house as compared to some of the existing houses in the village.  “My life is not the same as it was in the past. It has really improved in several areas for the better, for example in my old house, my children used to suffer from coughing diseases due to dust but now they are no longer experiencing such problems. Another example is that the money I was using to maintain my old house are now  being used to take a good care of my kids in terms of food and clothing and they are growing with good health. As it is when rain comes I just hear the sound of it but cannot penetrate through my roof and the sound of rains when hitting on the roof of my house becomes a song that I can even dance. Members of the community have turned my name from Joyce to madam Joyce because I am now being regarded as one of the well to do people in the village just because of this house. My entire family is feeling tremendously happy and very complete in the new house”, Joyce with tears of joy registering in her eyes explained

She went on to say that, she can see her kids having a bright future because of the house considering that now they have a good place to do their studies. “ I had been insulted through gossiping by my fellow members of the community because of the old condition of my previous house and this led me to being mentally affected but now I have the peace of mind because the same people are coming to my house now and again just to sit on the veranda and appreciate its beauty. My kids are now doing well at school because they are coming from a good house and have enough sleep during night’, She explained.

She lastly appreciated the good and commendable job done to her by Habitat for Humanity Malawi in coordination with the happiness team for giving her a place where by now she can call a home. “when I reflect back it becomes like a dream when I see myself coming from such a beautiful house. May God bless all the hands that took part in giving me a place that I can proudly call my home”, She concluded.

Joyce and her four kids are happily staying in the new house. Cleaning the surrounding, moping and planting of flowers around the house are some of the things Joyce has to do to make sure that the house looks great and last for a long period. She said she will always keep the doors locked to secure her belonging and to prevent children from unnecessarily playing in the house.

Life was not as simple as many people might think of for Chikondi. Being a woman, 38 years old coming from a very remote area and solely taking care of 7 children in a one roomed and  leaky house was not a simple thing for her.  It was her wish  to sleep together with all her kids in one house but due to lack of space some of her kids were seeking shelter from her neighbors. “I was feeling very unsecured in my old and I was very worried about my  the security of my children who were sleeping outside. It was my wish to sleep with them in the same house but was limited due to the shortage of space as you saw it”, She explained. It came like a surprise to her when she received a message from one of the community based organization members that she had been considered as one of the people who will benefit from the housing project that is being implemented by Habitat for Humanity in their area. “I almost fainted when I got the message that Habitat for Humanity will build a house for me and my family. It took me time to believe up until I saw bricks being delivered to my house. This was the time I personally believed that God is for everyone even those that are living in poverty and oppressed like myself”, she explained while her face was reflecting how she was feeling in her heart.

Chikondi, with a smile marked on her beautiful face said that the house has brought great joy to her life disregarding that at some point she sleep with empty stomach and she don’t have good beds to put herself on during night. She continued by saying that all the problems that she was facing in the previous house are now story of the past.

“I am overwhelmed with joy because of this beautiful and expensive house that in my life I never dreamt of. I feel much honored staying in a house that even my parents never tested it before. I can now accommodated all my children in this house that makes me to be the happiest person because I now know that my children are secured in this new house. I was being regarded less important citizen of the village due to where I was sleeping but with the coming of this house people have started recognizing me as one of the reliable member of this community. When I sleep during night at some point I woke up, sitting down and reflecting back to my old house then asking myself that is this true that I am the one sleeping in this house? Then in my heart I see God working upon my life”, Chikondi explained.

She finally thanked Habitat for Humainty Malawi and the ''Happiness"team for giving her a permanent shelter that her kids will enjoy even if she dies. She continued by saying that her hope has been restored with the coming of the house and appealed to Habitat for Humanity Malawi that such wonderful developments should also be extended to many people who are by now passing through the same situation like she was.

Currently; Enifa, Mayeso, Alida, Frank, Thiana, Sofina , Ketilina  and their mother Chikondi are happily enjoying the good atmosphere of the house. They are wishing all the best luck to those who by now have not yet found the opportunity of benefiting this house. She promised to take a good care of the house so that it should last longer.

Enter your email address and we'll help you reset your password.

Keep me up to date